Posted on November 15, 2014 by hippiedippyweatherman

Huntsville, Alabama lies in the heart of “Dixie Alley,” a climatological tornado hotspot stretching from northern Louisiana to northwest Georgia. It is particularly profound between Monroe County, Mississippi and Huntsville’s Madison County, Alabama. Despite this, the city had largely escaped the appalling devastation that had been wrought on areas to the west and south, including the city of Birmingham, throughout the 20th Century. 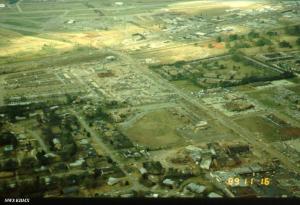 The week before Christmas in 1967, an F2 struck just east of downtown, causing extensive damage and killing two. On November 27, 1973, an F3 caused major damage to the airport, where the National Weather Service office lost its roof, and a nearby trailer park. On April 1, 1974, two days before the Super Outbreak, an F3 hit just west of downtown and wrecked several homes. Late during the Super Outbreak itself, another F3 hit the Redstone Arsenal and neighborhoods south of downtown. Just three people were killed in those four tornadoes combined.

The lone exception was way back in 1920, when an F4 devastated the town of Lily Flagg, seven miles SE of the city, now part of Huntsville’s southern suburbs, during the disastrous outbreak of April 20. Twenty-seven people were killed. Sixty-nine years later, another devastating F4 struck just two miles to the north.

It was a mild but humid fall day in northern Alabama. Headlines rang of the sweeping tide of freedom in Europe. The Berlin Wall had fallen just six days earlier and the Cold War’s thaw had shifted to a full melt. A strong cold front was digging into the Ohio and Tennessee River valleys and strong southerly winds were bringing in warm, moist air from the Gulf of Mexico. This abundant moisture combined with strong wind shear aloft resulted in very favorable conditions for severe weather. 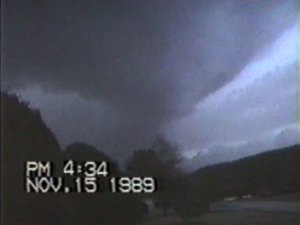 A view of the rain-wrapped tornado as it crossed Airport Road.
Source: Huntsville Rewound

As the afternoon progressed, the sky grew increasingly ominous and dark clouds began to gather. At around 2pm, a squall line began to develop over northeastern Mississippi and western Tennessee. Ahead of it, a handful of discrete cells began gathering strength. One of them was steaming straight for Huntsville. As it passed over the Redstone Arsenal at around 4:25pm, NASA meteorologists saw a low-hanging wall cloud within the thunderstorm and it had begun to rotate. The tornado touched down just a few minutes later and moved NE toward the southern suburbs of Huntsville, intensifying quickly.

Meanwhile, the work day was coming to an end and people began spilling out onto the roads to head for home. Most of them had no idea that a massive tornado was just minutes away from them. The National Weather Service issued a tornado warning approximately five minutes after touchdown and media outlets quickly picked up the warnings, but for many it was too late. Even if they managed to hear the warnings over the radio, those in cars were stuck in rush hour traffic with nowhere to go. 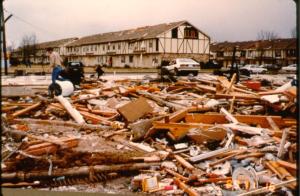 The storm roared across US-231 and into a densely populated business section as an F4 half a mile wide. Cars were thrown from the road as the tornado leveled several small retail complexes and the nearby Waterford Square apartments. Motorists trapped in rush hour traffic on Airport Road and Whitesburg Drive could only watch in horror as the tornado bore down on them, hurling more cars through the air, and smashing businesses and churches. Nineteen people died in just the one mile stretch between US-231 and Whitesburg along and south of Airport. Twelve of them were in cars, four at Waterford Square, and two in nearby businesses.

From there, the tornado moved through a wooded section before striking Jones Valley Elementary School on Garth Road, where 37 children were attending after school daycare. The entire second floor where the children had been moments before was wrecked as they and five teachers huddled in a stairwell. No one at the school was seriously hurt, however a woman driving to the school along Garth Road was killed. Numerous well-built suburban homes in the adjacent Jones Valley subdivision were destroyed and many more were severely damaged. 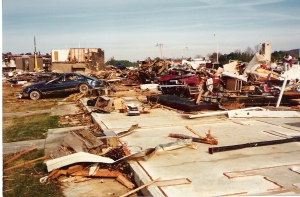 The tornado continued northeast into more rural areas, destroying what little it encountered. It crossed US-431 near Dug Hill and US-72 southeast of Brownsboro as a somewhat weaker tornado (though it grew to nearly a mile wide near US-72), before finally lifting back into the clouds near the south shore of Smith Lake. It had travelled 18.5 miles. In all, 259 homes, 80 businesses, three churches, and two schools were destroyed. Nearly 300 other buildings were damaged, many of them severely. Twenty-one people died and 463 were injured. Property damage came to over $100 million. It was the worst tornado to strike the state of Alabama in the 1980’s.

This entry was posted in Uncategorized and tagged Alabama, Huntsville, tornadoes, weather. Bookmark the permalink.